The oral potentially malignant disorders (PMDs) is a term used to describe the risk of malignancy being present in an oral lesion or condition either during the time of initial diagnosis or at a future date as per the World Health Organization (WHO). The prevalence of PMDs is reported to be 1–5% among the global population. The most common oral PMDs are leukoplakia, oral lichen planus (OLP), and oral submucous fibrosis (OSMF). The coexistence of all there PMDs is a rare presentation. Literature search showed a dearth of case report with all three PMDs. This is a case report of a patient with all three PMDs manifesting in his oral cavity.

A precancerous lesion (PCL) is a morphologically altered tissue wherein the likeliness of cancer occurrence s higher as opposed to its normal counterpart, whereas a precancerous condition (PCC) is a generalized state related with a considerably augmented risk of cancer. These terms PCL and PCC are replaced with “potentially malignant disorders” (PMDs) by the World Health Organization (WHO), which correspond to the risk of malignancy being present in a PCL/PCC either during the time of initial diagnosis or in the future.1

Oral lichen planus (OLP) is an autoimmune chronic inflammatory disorder of the skin and mucous membrane occurring in about 2% of the population.2 The term lichen planus (LP) was coined by Erasmus Wilson in 1869. Later, in 1895, Wickham described the characteristic white striae that develop along with flat-surfaced papules.3 Classical LP-based lesions in 6 forms (6P), i.e., polygonal, purplish papules, pruritic, and plaques forms. The WHO classified OLP as a potential premalignant lesion4 indicating its potentiality to convert into squamous cell carcinoma5 with malignant transformation (MT) of 0–3.5%.6 Women have a higher predisposition to OLP with a ratio of 2:1 and the condition is seen at the peak age of 30–60 years The unique etiology contributing to OLP is stress/anxiety, which can be causative/trigger factors in this disease. Literature suggests that the oral cavity alone is involved in one-third of the cases while both oral and cutaneous involvements are noticed in another one-third of cases. The common sites of OLP occurrence are the buccal mucosa, dorsum of the tongue, and gingiva (less frequently). The malignant potential is higher in atrophic/erosive OLP and when noted on the ventrum of the tongue. The site of OLP, undergoing MT is tongue as opposed to other sites.

Oral submucous fibrosis (OSMF) was presented by Schwartz (1952), which is a chronic PMD showing juxtaepithelial fibrosis of the oral mucosa. The change in lamina propria, epithelial atrophy along with juxtaepithelial inflammatory reaction leads to clinically noted stiffness of oral mucosa, trismus, and an inability to masticate. Oral submucous fibrosis is commonly noticed in Asians/Indians occurring in the second and third decade of life.7 It is reported to have an MT of 7–30%.7 The prime etiology which is reported with strong association OSMF is habit of areca nut.8

The OSMF and OLP are two frequently reported PMDs with immunological pathogenesis making them similar apart from the occurrence of oral cancer.9

Leukoplakia is a “white patch or plaque that cannot be characterized clinically or pathologically as any other disease except for its association with the use of tobacco”. In the year 1997, the WHO defined and van der Waal et al. modified the definition overtime. The current acceptable definition is “A predominantly white lesion/plaque of questionable behavior having excluded, clinically and histopathologically, any other definable white disease or disorder”. The leukoplakia is either homogeneous/non-homogeneous or speckled. The speckled leukoplakia (SL) is known to have white and red components and has the highest malignant potential among the types of leukoplakia.

We are reporting a case of the above-mentioned PMDs in the oral cavity of a patient.

A 65-year-old male patient reports to the department with a chief complaint of pain and burning sensation involving the entire mouth for 15 days, he also gives a history of difficulty in swallowing, and the pain is insidious in onset dull and continuous in nature. There were no aggravating and relieving factors. The patient gives a history of being diagnosed with OLP in government medical college and was treated with topical (kenocart) and with systemic (cyclosporine) to which the patient was refractory. The patient’s past dental history revealed he underwent dental extraction a year ago. On evaluating the personal history patient was habituated toward chewing tobacco for 1 year with a frequency of 5–6 times per day chews for about 15 minutes and spit it out; however, he gives a history of quitting the habit for 2 months. On examining the patient’s oral cavity presented with a single non-scrapable grayish-white patch which was raised from the surface giving a crack mud appearance with areas of erythema on the right lateral border of tongue measuring 4 × 2 cm (Figs 1 to 3). The patch was non-tender and leathery in consistency. On examining the buccal mucosa it revealed a grayish-white non-scrapable patch with interspersed areas of erythema and thin fine radiating striae extending from the periphery of the lesion being evident at the level of occulusal plane bilaterally. On palpating the patch, it was non-tender and raised from the surface. On further examination of the buccal mucosa, there were palpable fibrotic vertical bands running from upper vestibule to the lower vestibule bilaterally. The uvula was short and was bud shaped. However, mouth opening and tongue protrusion were within normal limits. Based on clinical findings, a provisional diagnosis of OLP, OSMF, and SL was proposed. 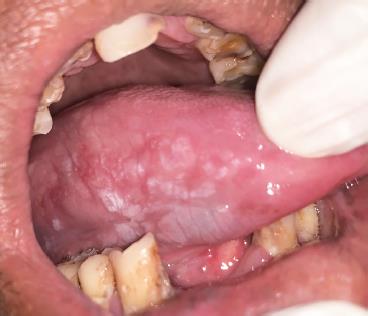 The patient was advised for a routine hematological investigation which was reported to be within normal range. The initial phase of treatment was managed with topical kenocart and intralesional steroids 1,500 IU of hyaluronidase with dexamethasone 4 mg with 2% lidocaine hydrochloride. However, the patient had relief in the burning sensation but the leukoplakic lesions on the tongue were intensifying in their expression, subsequently, the patient has treated with isotretinoin 10 mg for 6 weeks after which the tongue lesion regressed.

The coexistence of PMDs is rare in presentation. This is a case report of multiple PMDs in a patient for which the rate of MT is considered high.

The OSMF among the PMDs has a cycle of abnormal collagen deposition associated with an MT rate between 1.5% and 15%.10 Previous reports stated that chewing betel nut is a significant risk factor for OSMF.11 Around 74% of the betel quid chewers are also tobacco smokers (86%) or alcohol drinkers, which adds on to OSMF aggression.12,13 In this case, the patient had a clear habit of betel nut chewing with tobacco and alcohol consumption, a history which would have caused the addiction and increase the risk of MT.

The erosive OLP is often surrounded by fine radiant keratinized striae with a network appearance occurring at age of 60 years,14 which was in accordance with our case. The OLP lesions are persistent than the skin lesions and carry a risk of MT of 0–12.5%.15

Leukoplakia is reported to have an MT from 0% to about 20% in 1–30 years.16 The WHO coined “speckled leukoplakia” (SL) which has the highest malignant potential among the various types of leukoplakia.17

Pavan et al. 2018 reported the sites (tongue or floor of the mouth) and age (older groups) are predictive indicators for MT. The nonhomogeneous lesions >200 mm in size, occurring in non-smokers, when age is over 60 years with high grade of dysplastic changes correlate with an increased risk of MT.18 These are in line with our case presentation, which predicts the risk of MT.

There are various possibilities in managing OLP among which non-surgical interventions like vitamin A and retinoids are useful. The Cochrane review suggests that vitamin A and beta carotene may completely resolve the oral lesion and the retinoic acid may prevent histological worsening. 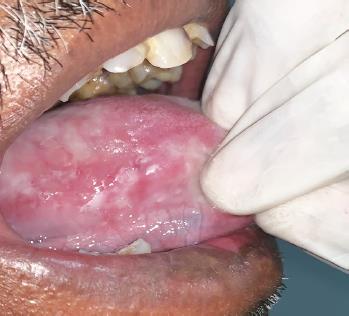 This patient was managed using topical corticosteroid considering the effectiveness to be 6.68 on a scale of 1–10 by Pinas et al.19 in a national survey; however, there was no significant improvement with this management modality and the patient continued to present with lesions. After the observation, the patient was managed with isotretinoin which resulted in the significant improvement of symptoms. The treatment modality was adopted from A Cochrane review which suggested vitamin A and beta carotene were effective in managing cases refractory to topical corticosteroids.20

It is beyond doubt that multiple PMDs were evident in this case which posed a great challenge toward formulating an effective treatment plan. The preferred management modality of using steroids in both topical and intralesional forms presented with partial success, however, oral administration of Isotretinoin was effective in managing the signs and symptoms in this case subsequently the patient was followed up for a lesion free period of 6 months.