Endodontic Management of Radix Entomolaris: A Report of Two Cases

Root canal anatomy is complicated and interpretation of the variations from the norm is crucial for an optimum treatment outcome. Radix entomolaris (RE) is a common variation recorded in the mandibular molars. It is characterized by a supernumerary root located distolingually. Proper diagnosis is critical for identifying this supernumerary root and preventing misdiagnosis, which could potentially give rise to an unfavorable outcome. The objective of this article is to describe the successful management of two cases presenting with RE.

Mandibular molars usually present with two roots having two mesial and one or two distal canals.1 One of the major variations in mandibular molars is the occurrence of third root present lingually or buccally. Carabelli in 1844 was the first to report the presence of an extra third root located distolingually and termed it as “radix entomolaris” (RE).2 This additional distolingual root was termed as RE by Bolk.3 Sometimes, an additional third root may be discovered on the mesiobuccal side and is termed as “radix paramolaris” (RP).4 Occurrence of RP is rare compared to RE.5 RE is reported on mandibular first, second, and the third molar, with the least frequent occurrence on mandibular second molar.6,7

Radix entomolaris is mostly shorter and curved compared to mesial and distal roots and can appear separately or fused with the remaining root which could add to increased difficulty in diagnosis and treatment.8

De Moor et al. in 2004 divided RE according to the curvature of the root/root canal:9

Song et al. in 2010 classified two additional variations of RE:10

A 39-year-old female patient was referred to our outpatient department for endodontic management of the lower first molar (#46). The patient had a history of intermittent pain 5 months back and aggravated on cold and hot stimuli. On clinical examination, there was a fixed partial denture in relation to #46 and #45. The patient had no tenderness to palpation and vertical percussion. On radiographic examination, diffuse radiolucency in relation to distal root was seen (Fig. 1A). Based on findings, a diagnosis of asymptomatic apical periodontitis was formulated. 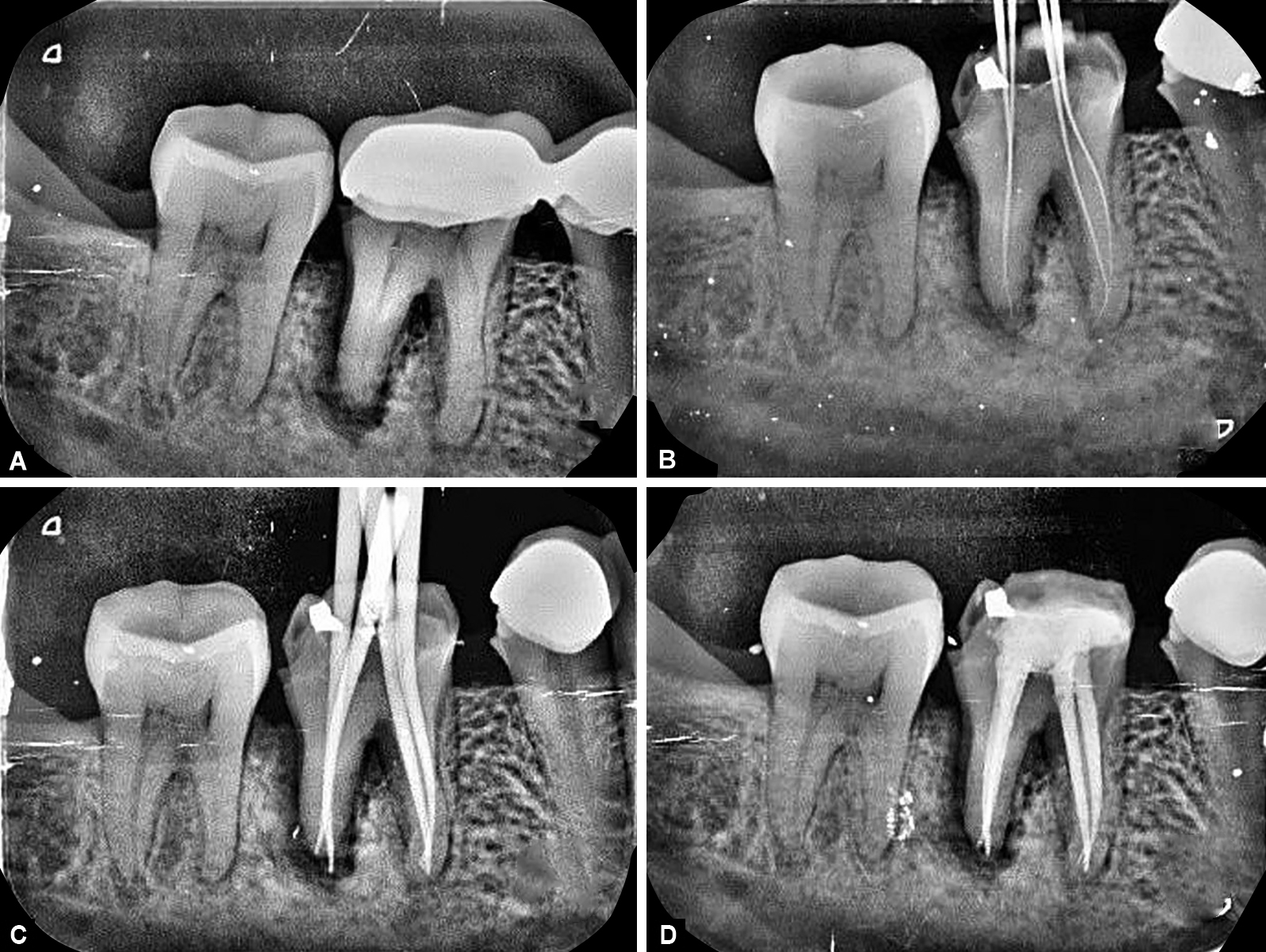 The patient was recalled after 2 weeks and was asymptomatic. The calcium hydroxide medication within the canals was removed using #30 H-file and irrigation with 3% sodium hypochlorite. Final irrigation was done using 2% chlorhexidine (Asep-RC, Anabond, India) and after drying the canals with paper points, master cones were selected (Fig. 1C) followed by obturation using AH-Plus sealer (Dentsply, Maillefer) and gutta-percha. The access cavity was sealed using composite restoration (Fig. 1D).

A 29-year-old male patient was referred to the outpatient department with a prime complaint of pain in relation to the lower left first molar (#36). The patient had a history of pain in chewing and intermittent pain for the last 1 week. On examination, deep caries was present occlusally on #36, tenderness on palpation, and vertical percussion were present. Electric pulp testing showed delayed reading and thermal test showed no response. Radiographic examination indicated periapical radiolucency in relation to distal root and a second distal root was seen (Fig. 2A). A diagnosis of symptomatic apical periodontitis was formulated and endodontic treatment was initiated.

Figs 2A and B: (A) Preoperative; (B) Master cone selection 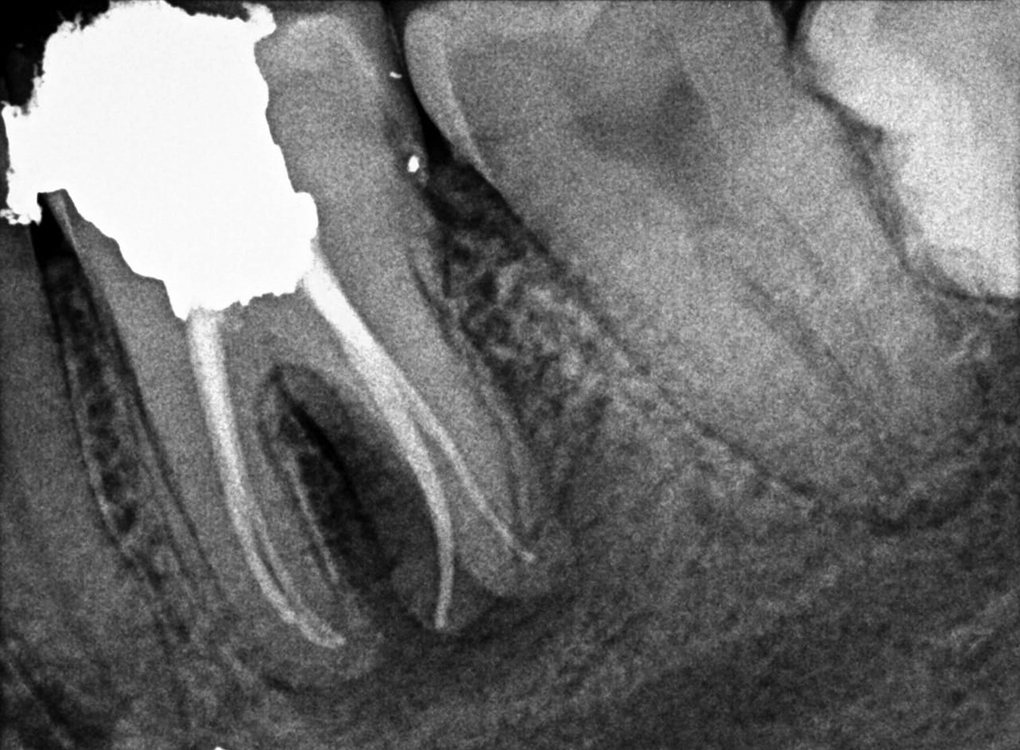 Identification of variations in root canal morphology plays an important role in successful endodontic treatment. Possible variations in root canal morphology need to be understood properly in order to prevent treatment failures. RE is a major variation identified in the mandibular first molar. Without proper care taken during diagnosis, visual examination, and treatment, chances of missing this variation are high. Therefore, RE can be identified by a combination of clinical, radiographic, and other imaging modalities especially cone-beam computed tomography as well as by using different endodontic accessories.

On clinical examination, factors, such as the presence of an extra cusp, prominent distolingual lobe, bulbous crown, cervical convexity, complex external contour of the furcation hints at the possible presence of RE. Radiographically, the presence of a double periodontal ligament image or an obscure view of the distal root/root canal also provides clue to the presence of RE. For this, a thorough radiographic examination is required. Routine straight radiographs cause overlapping of distal roots making the identification of entomolaris root difficult.4 Therefore, a preoperative radiograph taken using the tube shift technique (25–30°) assists the clinician in finding the supernumerary root and also helps in knowing whether it is located buccally or lingually.15 It has been established that the accuracy of diagnosing mandibular molars with three roots is nearly 90%, even by using panoramic radiographs.16

During the treatment procedures, the use of adjunctive aids, such as dental loupes, dental operating microscope, and intraoral cameras are useful in canal orifice identification. Methods, such as inspecting the dentinal map, identification of canal bleeding points, using instruments, such as DG-16, pathfinder, ultrasonic tips, and micro-opener, staining with 1% methylene blue in the pulp chamber floor, champagne bubble test helps in identifying the missed canal.4,15

During access cavity preparation the outline has to be modified accordingly based on the RE orifice identification from triangular to more rectangular/trapezoidal form in order to obtain straight-line access for instrumentation and obturation.

Entomolaris root is characterized by moderate to sharp curvature especially in buccolingual direction which causes technical difficulties during cleaning and shaping and has higher chances for instrument separation, furcal or strip perforation, vertical root fracture, canal straightening, ledge formation, loss of working length, root canal transportation.15 Therefore, during endodontic procedure special care should be taken during orifice enlargement and cleaning and shaping. Use of 10 k-file or smaller files should be preferred during initial canal negotiation and flexible nickel-titanium rotary instruments with less taper must be used during chemomechanical preparation to prevent procedural errors.

Thorough knowledge regarding the internal anatomy of the root canal system and its most common variations could assist clinicians in preventing misdiagnosis and ensure a successful treatment outcome. Radix entomolaris is characterized by a supernumerary distolingual root which usually appears short and has distinct curvature in most cases. Therefore, iatrogenic errors like misdiagnosis of this variation, technical difficulties during cleaning and shaping, such as ledge formation, perforation, instrument separation are high. Hence, meticulous care should be taken from diagnosis till the completion of the treatment procedure.